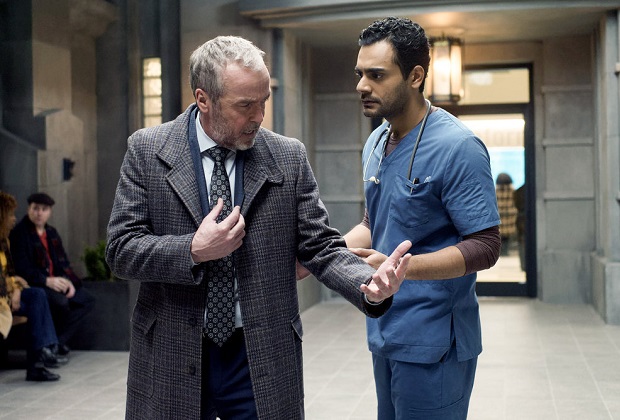 The doctor will become the patient during Transplant‘s season finale — and worse, he’s in critical condition.

In TVLine’s exclusive sneak peek from the second of tonight’s two episodes (which kick off at 9/8c on NBC), Dr. Bishop and Bash (played by John Hannah and Hamza Haq) are discussing a mistake that the former made with a patient. Then, suddenly, Dr. Bishop’s arm goes numb and he collapses in front of Bash, who frantically starts performing CPR while flashing back to his traumatic past in Syria.

Dr. Bishop’s condition is “something very serious that’s been plaguing him since Episode 1, and it gets more serious than anyone had anticipated,” series star Haq tells TVLine.

Seeing his mentor in such a precarious state will take its toll on Bash, who has a lot of complicated emotions tied up in the situation. “Bishop has been a staple for Bash, a father figure that he’s looked up to, and given Bash’s tragic loss of his parents, those feelings are brought up again,” Haq previews, adding that viewers will learn “a great deal” about his character’s past in the season ender.

Elsewhere in the finale, Bash and Mags race to save a woman with mysterious symptoms who was nearly killed by their team’s medical error; Theo tries to help a gravely ill teen and his family deal with the possibility that hope has run out; and June finds a mystery patient unconscious in the waiting room.

Press PLAY above to watch the video, then hit the comments with your hopes for the episode!