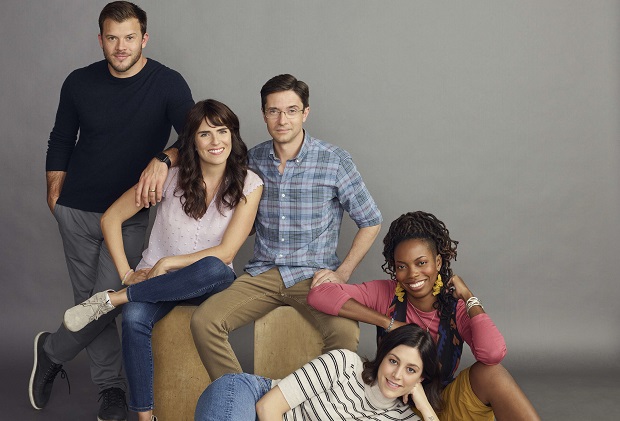 ABC is preparing to give viewers a Home Economics lesson, with a Spring 2021 comedy series starring and executive-produced by Topher Grace, TVLine has learned.

The single-camera comedy explores “the heartwarming, yet super uncomfortable and sometimes frustrating relationship between three adult siblings: one in the 1 percent, one middle-class, and one barely holding on,” reads the official synopsis.

Grace (That ’70s Show) will play middle sibling Tom, an intellectual/novelist who has had a couple of books that sold decently, though his last one did not. Caitlin McGee (Bluff City Law) portrays the eldest sibling, Sarah, a therapist for at-risk kids who is married to a teacher, and as such they’re often scraping to make ends meet. A doting mom to her two kids, she tries to be a guru to her two brothers, who obviously would be lost without her wisdom.

Finally, Jimmy Tatro (Modern Family) will play third sibling Connor, who never met a corner he didn’t try to cut. Conner runs his own private equity firm and is outrageously wealthy. He has a keen financial mind, but he’s clueless about how to parent his young daughter Gretchen. He recently moved his family to the Bay Area so he could be closer to his siblings Tom and Sarah. But now he’s learning how his siblings actually feel about him.

The cast also includes Karla Souza (How to Get Away With Murder) as Tom’s wife Marina, a proud New Yorker and former lawyer who would like to go back to work one day (if only to escape her children); SNL vet Sasheer Zamata as Sarah’s wife Denise, a superhumanly patient public-school teacher whose relentlessly positive attitude often perplexes the rest of the family; and a child actor ensemble populated by Shiloh Bearman, Jordyn Starr Curet, Chloe Jo Rountree and JeCobi Swain.

Home Economics is written by Penguins of Madagascar’s Michael Colton and John Aboud and inspired by Colton’s family.