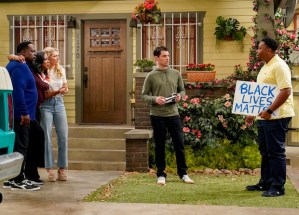 The Neighborhood took a dramatic detour with its Season 3 premiere to address police misconduct and the Black Lives Matter movement.

Monday’s episode showed the Butlers and the Johnsons unite after Trey (played by series scribe Malik S.) was harassed, beaten up and arrested by the cops. The incident — which played out off screen, in front of Calvin and Tina’s oldest son Malcolm (Sheaun McKinney) — triggered a wide range of emotions, as well as opposing viewpoints on how to fight systemic racism.

“It felt like we were onto something that was part of the world we live in and needed to be discussed,” series star and executive producer Cedric the Entertainer tells TVLine. “[Series creator] Jim Reynolds and I talked about how we would [do it], and we were really happy with how it turned out.”

Reynolds, who is white, knew this episode would require an open ear and plenty of discussion. “We knew that we really needed to spend a lot of time talking first,” he says. “It was of primary importance as we were getting into this issue that our white writers listen to our Black writers. This is an experience that white writers and white people can’t understand. It’s not the way [our] lives have ever existed, and I think there hadn’t been a tremendous understanding, or even much understanding, until George Floyd was murdered. And so those conversations were really crucial.”

After multiple discussions, it was decided that the injustice at the center of Season 3’s premiere would involve a tertiary character (Trey) that the audience had met before. “We basically incite an incident that… allows us to bring about the resemblance of [real-life events],” Cedric the Entertainer explains. “Both George Floyd and Breonna Taylor were extremely tragic [situations] because they both ended in death, but we knew we didn’t want to go that far with it, so what we did was approach an overexertion of police brutality.”

Once the story came together, it was integral that everyone involved knew that this wasn’t going to look or feel like a typical episode of The Neighborhood. “This was an episode where it was going to be OK not to wait for a laugh, and for it not to have the same rhythm that we’re used to,” says co-star Max Greenfield. “The episode would allow scenes to really land, to be serious and be thoughtful.” 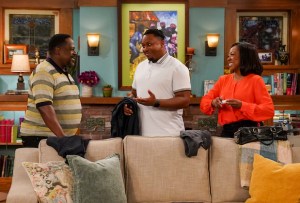 As Greenfield points out, “it’s not an episode that anybody wants to do,” and “it’s unfortunate that we have to make an episode like this. But given the nature of our show, and what our show is about, it would have been irresponsible for us not to do [this] episode,” he says. He then points to a statement made by his co-star, Marcel Spears, who plays Malcolm’s younger brother Marty. “Something that he so eloquently pointed out is that just because this episode directly addresses Black Lives Matter the way that we’ve seen it the past couple of months, doesn’t mean that every episode of our show leading up to this one wasn’t a celebration of Black Lives Matter as well. It’s just a different tone.”

In addition to telling the right story, the Powers That Be also had to factor in what was and wasn’t possible from a production standpoint, due to new COVID safety measures. “That is truly where the dance happens,” Cedric explains. “We were dealt with so many things. One was the pandemic of it all, and the new protocols, so we couldn’t really do a scene with a lot of extras… [and] that prevented us from doing certain things. So you don’t see the actual brutality, but you understand it, and you see some of the results afterwards, and some of the communication that it takes to try and get to a point and some satisfactory end.”

The communication he’s referring to came in second-to-last scene, after Malcolm’s nonviolent protest had been challenged by the police. When Calvin caught up to his son, he found him marching alongside a few remaining protesters who were willing to resort to violence to have their voices heard.

“As the episode escalates, it’s a lot like what we see now,” Cedric explains. “The younger generation [doesn’t want to be] patient and allow things to play out… They feel [waiting is] totally disadvantageous to our community and our culture, our people and the way we think, and nobody’s going to care. [Malcolm] takes that attitude, and he’s about to go and push towards something that I have to explain to him has more consequences than what his anger is [allowing him to see]. You want someone to stay with the fire, stay with the fight, stay engaged and really push for change, but do it in a way that doesn’t jeopardize their life or their freedom.” 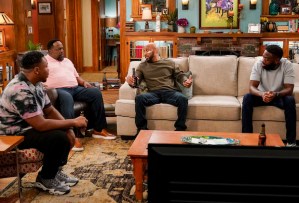 As the episode drew to a close, and the newly freed Trey sat down to dinner with the Butlers and the Johnsons, the CBS comedy cut to footage of the actual Black Lives Matter protests that took place over the summer, throughout Los Angeles and the greater United States. “I always felt it was essential to incorporate the real-life footage because, to me, it was the most powerful way to showcase the strength, scale and diversity of the BLM movement,” Reynolds says. “By seeing the faces of actual people, even in masks, who are willing to risk their physical well-being in order to make the world a just place for everyone, it humanizes the experience, which in turn makes it harder to ignore.”

The footage ultimately allowed The Neighborhood to showcase the protests in a way that a traditional, four-camera sitcom couldn’t stage or replicate. “For a CBS half hour, we can’t really afford to get all the details out, but I think we did a great job being able to express what we needed to tell,” Cedric says. “At all times, we wish we could push the envelope a lot further, but we do understand our audience, we do understand some of the needs and the ability of people to also not be beat down with this. We’re a situational comedy, but we want to [do] something that moves the meter.”

What did you think of The Neighborhood‘s Season 3 premiere? Grade it via the following poll, then sound off in Comments.