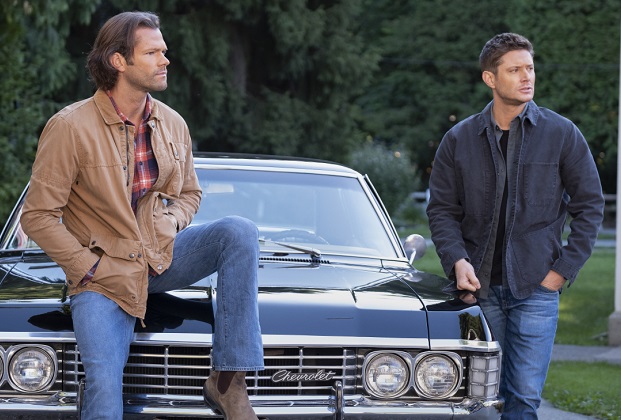 As a Supernatural viewer, it’s impossible to hear the title of the series finale, “Carry On,” and not get a serious case of feelings. The name, of course, evokes the show’s unofficial theme song, Kansas’ “Carry On Wayward Son,” which has played during the “Road So Far” recaps ahead of almost every season finale. It’s also a reminder that the Winchesters — and the #SPNFamily — will carry on even after the final seconds of Thursday’s series ender.

“That title actually came from one of the assistants in our office. I’m going to give her credit. It’s Casey Hamnos,” co-showrunner Andrew Dabb told TVLine earlier this fall. “She was just talking to one of the other people that works in the office, and she’s like, ‘The last episode should be called “Carry On,” and I was like, ‘That is a great title for the last episode!’ So that’s where that came from.”

And to paraphrase the classic Kansas tune, will there be peace when Sam and Dean are done?

“I think having Sam or Dean Winchester ever fully at peace is a big ask,” Dabb said. “There’s always something out there. These are guys that are soldiers. And even if the bigger stuff has been taken care of, there’s smaller stuff that kind of keeps them going. So is it a case where I believe either of them could ever walk away from the job, sit back, put their feet in the sand and sip piña coladas? Yeah, they could, but not today. And then something’s gonna come along that’s gonna force them back into the job… They have a moral obligation that keeps them from being able to kind of give up the fight.”

The Supernatural series finale airs Thursday, Nov. 19 at 9/8c on The CW, following a retrospective special at 8 pm.