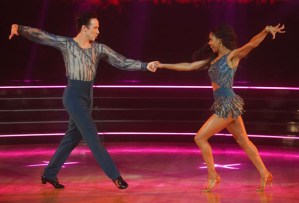 Only one week remains until Dancing With the Stars takes a few Lysol wipes to its Mirrorball trophy and awards it to a Season 29 couple.

But with six duos still left in the competition, Dancing had a lot of business to attend to on Monday’s semifinals episode, including two performances from each couple and a double elimination at the end of the broadcast. First up, in the redemption round, each contestant reprised a dance style with which they’d struggled earlier in the season, this time under the tutelage of a judge; the second round didn’t have a theme, other than… perfection? Every single couple earned a perfect score in Round 2, rendering them fairly meaningless by the end of the episode, no?

Before we get to the results, though, let’s break down the evening’s performances:

SKAI JACKSON AND PRO ALAN BERSTEN
For their redemption dance, Skai and Alan attempted the cha-cha, which they first performed in Week 6 to fairly disastrous results. At first, I worried they were destined for the same fate this time, after Skai stepped on the wrong foot in an early combination. But she pulled it together for the rest of the routine, and her smile was so, so much more relaxed this time around. Later, the pair performed an exquisite Viennese waltz, in which Skai was both emotionally connected to the choreography and incredibly graceful through every twirl. Judges’ Scores: 27/30 and 30/30

JUSTINA MACHADO AND PRO SASHA FARBER
Justina and Sasha began by improving greatly upon their Week 7 tango, with much more fluidity and much less bounce on Justina’s part. But their real shining moment came during their contemporary in Round 2. It helped, of course, that Justina and Sasha were dancing to a lovely, stripped-down cover of “Holding Out For a Hero,” which was bound to get us all a little teary-eyed — but their respect and care for each other was on full display, and Justina brought a gorgeous sensitivity to all of her movements. Judges’ Scores: 28/30 and 30/30

JOHNNY WEIR AND PRO BRITT STEWART
First up for Johnny and Britt was a salsa, which was certainly stronger than their initial Week 6 showing, but still had some fumbled footwork in the middle of the number. (Well, I think it did; frankly, I was distracted by Johnny’s nipple shirt.) Their jazz in the second half was much stronger, though the judges oddly made no mention of Johnny and Britt’s side-by-side sections, which were consistently out of sync. Judges’ Scores: 27/30 and 30/30

NELLY AND PRO DANIELLA KARAGACH
Nelly and Daniella (why haven’t I been calling them “Danielly” all this time?) first redeemed themselves with a paso doble, which allowed Nelly to demonstrate power and strength without letting his frame get too rigid. In the second round, they performed a jive — and I have some thoughts about that perfect score, folks! No disrespect to Nelly, of course: I imagine the pressure must have been intense after every other couple scored a perfect 30 in Round 2, and he was tasked with one of the most intricate and challenging styles for his second routine.

Plus, you could really see him trying to get that footwork right; as the pace of the music quickened, he was dedicated to executing it correctly, and there weren’t any disastrous fumbles, to his credit. But the jive relies so heavily on crisp footwork, and all three judges have previously dinged other contestants for not delivering those kicks and flicks with sharp retractions. Nelly’s kicks lacked that same power, and though his performance was so fun, it was nowhere near perfect. Judges’ Scores: 26/30 and 30/30 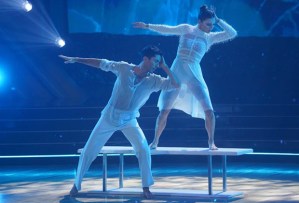 NEV SCHULMAN AND PRO JENNA JOHNSON
I’ll admit, I laughed a bit when Nev and Jenna’s redemption dance turned out to be their Week 1 style, the foxtrot. Everyone was bad in Week 1! And Nev was actually pretty good, accentuated booty notwithstanding. So of course they dazzled with this second attempt… because literally everyone is better now than they were in September. What about their jazz? Or the jive that just earned criticism last week? Gah! Anyway, they also danced a contemporary, and it was beautiful. Judges’ Scores: 30/30 and 30/30

KAITLYN BRISTOWE AND PRO ARTEM CHIGVINTSEV
Kaitlyn and Artem’s redemption style was the paso doble, which, it turns out, is executed much better when you’re not wearing an enormous Cruella de Vil wig. But even without the improved costuming, this paso doble was electric and so strong on Kaitlyn’s part; that moment when the music stopped and Kaitlyn leaned backwards with some sass? Get it, girl. Interestingly, I thought their contemporary — which was dedicated to Kaitlyn’s late friend and accompanied by the very song played at her funeral — was oddly emotionally disconnected. That could have just been Kaitlyn trying to keep herself composed during the routine, but it was jarring to see her break down in rehearsal, only to perform with a strangely blank expression. Judges’ Scores: 30/30 and 30/30

And now, the results:

Your turn! How do you feel about these finalists? Tell us in a comment!